Roots & Wings enjoys a close and collaborative relationship with the Transition movement. We work with Transition Westchester, Transition Hastings, and the Mid-Atlantic Transition Hub and share their vision of rebuilding resilience and reducing C02 emissions.

Transition Cafes are an opportunity for people to get together to discuss how our world is changing in face of the challenges of resource depletion, climate change and the economic disruptions that are occurring because of them. Come to listen, discuss, drink coffee, make new friends and come away with new ideas and deeper understanding.

All are welcome. This Cafe is also a Meetup Group. You can RSVP here through the Meetup Group, or here, if you like, else just show up. 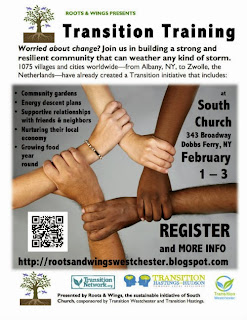 LOCAL RESILIENCE: TRANSITION TOWNS NEAR YOU

"Push the envelope. Model different ways to do things. Be visible to the larger community. It's our only option and our only hope."

"Let's leave a better world for those who come after us."

Transition is a community organizing plan that responds to the realities of climate hanse and the shrinking supplies of cheap energy. It evolved in the UK in 2006 and quickly moved from towns in Ireland to neighborhoods in Portugal, from cities in Brazil to rural communities in Slovenia, from urban locations in Australia to islands off the coast of Canada.

There are now 1075 Transition initiates worldwide, with 323 in the Unites States alone. It's a movement that has a toehold in Westchester County, too, with groups

in Katonah, Ossining and Hastings. Common goals of Transition Towns include energy descent plans, rebuilding the local economy, supportive relationships with friends and neighbors, and growing food year round.

Says John Bell, founder of Transition Westchester, "We've been through Hurricane Sandy. We've seen the first gas lines since the 1970s Something is changing. Transition will help you understand what is changing and give you tools to deal with these changes." 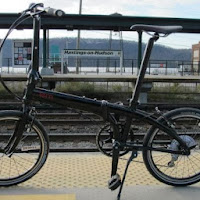 "When I was laid off, I found myself craving community," says Elizabeth Marouk-Coe, a teacher living in Hastings, NY. "I wanted to start new and be part of the solution, rather than part of the sustem. I met someone in a parking log and she said to me, 'Have you heard of Transition?' I am now one of the founding members of Transition Hastings. My neighbors and I are now sharing a generator and planning a storehouse. We're bartering. We're hoping to map all of the neighborhoods in Hastings and put emergency readiness practices in place.

"The uncertainty of our times is no reason to be certain about hopelessness." --Vandana Shiva